We offer many different bicycle spokes

The spoke for the bike wheel on principle is nothing more than a wire. But of course, the manufacturers of spokes work with very high-quality raw materials in order to provide the highly-loaded component with a long life. The interaction of the spokes in the wheel ensures the smooth running without lateral or radial run-outs and the stability. That is to say, the spokes are the only connection between the stable hub and the rim. These essential properties only exist if the spokes are correctly tightened. Most of the spokes consist of steel, since this material features a good combination of stability and elasticity. The elasticity of the material makes wheels comfortable and prevents spoke breaks.

In order to reduce the weight of the spokes, there are several approaches. Most of the spokes in the mid-range nowadays are single or multiple butted (tapered). This means that the points with a maximum load have a higher diameter than the points with less load. In practice, such spokes are mostly thicker at the spoke's head and thread and thinner in the middle. This butting is mostly achieved by compaction of the material, which results in the spokes being more break-proof than cylindrically shaped spokes.
Simple and cheaper spokes are cylindrical and have a continuous diameter, from the head to the thread.
The third variant are the so-called blade spokes. They are round at the head and thread but flattened in the middle. This results in a higher rigidity, less weight and better aerodynamics.
Of course there are also more specialized spoke shapes of aluminium, which have their own properties due to their shapes depending on the manufacturer. Please note: In case of a break or damage, they always must be replaced by exactly the same product since in most of the cases, each wheel has its own spokes (spoke lengths). 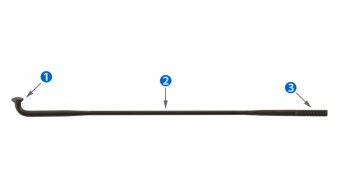 The classic spoke consists of spoke head?, via which it is mounted to the hub, a mid-section or shaft section ? and the thread ?, which provides the connection to the rim via the nipple.
The spoke's head can be bent by 90° or straight, this is what one calls the Straight Pull It depends on the construction of the hub, which type of spoke you must use. The hub contains the seating for straight-pull or for classic spokes' heads bent by 90°.